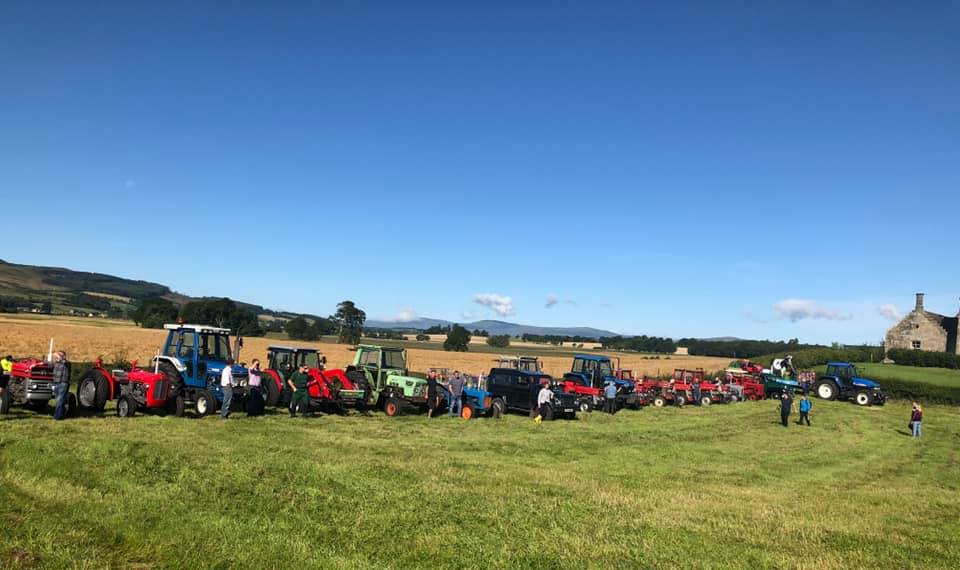 The year began with enthusiastic planning for Kinross Show to take place at RSPB Loch Leven on Saturday 8th August 2020. The trustees and organising committee were looking forward to running the traditional livestock classes along with horse and pony sections. Plans for the Children’s Education Marquee and Entertainment Stage were off to a good start and trade stand and craft tent applications were ready to open. The Ryeland Sheep Society were due to hold their
special show at Kinross for the second time and new for 2020 it had been agreed to invite the traders from the Kinross Farmers Market to run a market at the show field.

A successful funding application had been made to the Kinross-shire Fund to bring a special form of “edutainment“ from The Sheep Show – a hugely popular travelling attraction to visit Kinross for the first time. A small organising team had been formed to run a fundraising barn dance in June, a suitable venue had been secured, a band booked with sponsorship agreed and catering in place. An auction of special items and experiences was to be held at the event. As everyone is aware the world entered a global pandemic in March 2020 and due to government restrictions all of the aforementioned had to be cancelled. In light of the 2019 Kinross Show cancellation due to severe weather, in the run up to the event, this was disappointing but could not be avoided and the safety of everyone involved was paramount in all decisions. The decision to cancel the show was taken in early May, this provided adequate time for the secretary to work on everything involved in the cancellation and saved costs.

The restrictions in place throughout the spring made it challenging to see how the charity could achieve anything. However with some imagination and technology (What’s App and Zoom) enabling discussion and decisions to be made between the trustees and the committee, the society has achieved the following whilst adhering to all
rules and guidelines:

The Garden Competition – as an alternative to exhibiting horticultural produce in the flower show tent it was decided to run a garden competition. Given that lockdown had provided lots of time for gardening the competition attracted 14 entries from a diverse range of gardeners across Kinross-shire. The competition was well received and could be a
firm fixture from now on.

The Crops Competition – this included classes for cereals and potatoes and farmers were able to enter this as normal with the judging taking place by one judge travelling to the fields alone.

The Dog Show – this is a hugely popular part of Kinross Show with dog owners of all ages normally bringing their canine companions to compete for a rosette. This year the volunteers who run the event moved it online with photographs submitted and judged virtually.

The Kinross Show Tractor Parade – A tractor run including a range of models from old to new took place throughout Kinross-shire on what would have been show day (Saturday 8th August 2020). This proved to be a fantastic success and the highlight of the year. The parade gave the trustees an opportunity to advise and educate the public on agriculture. It was decided to decorate a float to reflect farming in Kinross-shire, the Royal Highland Education Trust loaned their model dairy cow as the centrepiece, representing the four dairy farms in the area, a small tractor represented the machinery required for food production. Kinross-shire has many beef and sheep farms, which were symbolised with a model Angus calf and replica lambs. The float was decorated with sheaves of wheat, barley, oats and trays of potatoes from arable farms in the area. Volunteers worked independently to create the float, it was finished with a colourful painted rainbow thanking key workers for their efforts during the pandemic. Two pairs of magnificent Clydesdale horses joined the process up Kinross high street, they represented a bygone era in agriculture. The history lesson was completed by the twenty tractors of all ages taking part in the parade. Guidelines on socialdistancing were circulated with all the marketing for the parade so families turned out and stood distanced from each other but in great numbers to cheer the drivers on.

Virtual Cheese and Wine Evening – moving the annual dinner online and inviting members and friends to join virtually seemed to be a fitting finale to the year end. Kinross-shire Agricultural Society hosted a virtual Cheese and Wine event on Saturday evening, attended by 70 members and friends of the society that runs Kinross Show. The guests enjoyed a selection of Scottish cheese and biscuits with a bottle of wine of their choice, Loch Leven’s Larder and Fruix Storage generously sponsored the food. Tickets were sold online and delivery was contactless, the event raised over £1000 for Kinross Show funds. Martin Kennedy, National Farmers Union Scotland Vice President, provided some light hearted entertainment that raised a lot of laughs and the highlight of the evening came from his daughter, Katrina, who sang a beautiful version of Caledonia.