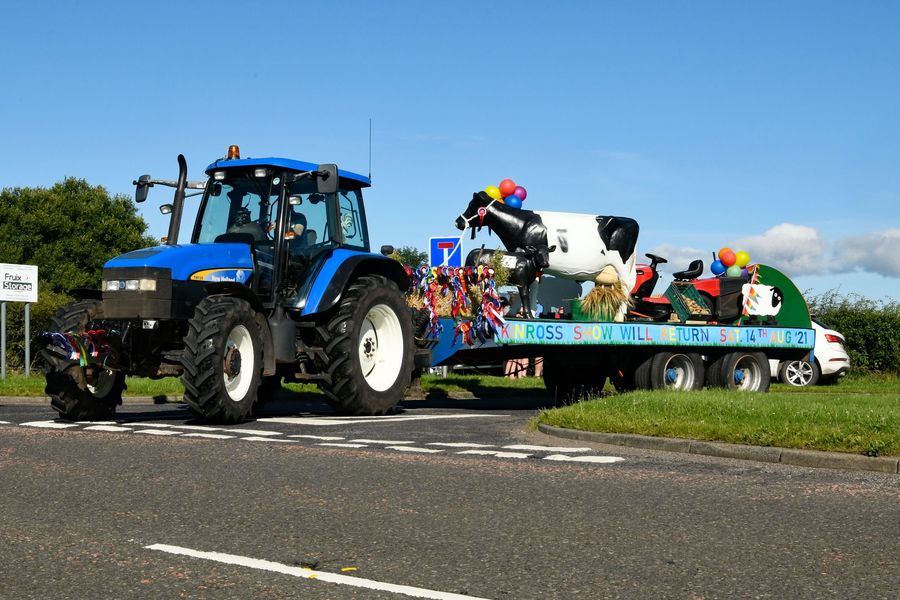 The organisers of Kinross Show took their show on the road on Saturday (9 August) to showcase farming in Kinross-shire, and celebrate what would have been Kinross Show day.

Twenty local tractors participated in the road run which also included a magnificent float decorated by the committee and Clydesdale horses. The event, which was run alongside a few competitions, received incredible support from the community with spectators taking to the streets to wave and cheer as the procession passed.

The journey which was led by Andrew Turnbull, President of Kinross-shire Agricultural Society was overwhelmed by the support:

“I was very keen to keep the spirit of the show alive so we came up with the idea of a tractor run, hoping it would be a good way to take the show to the people who normally visit…with the easing of lockdown restrictions it became safe for people to view the tractor parade whilst keeping socially distant and I was amazed by the attendance. I was driving the float and round every corner of the route there were people waving and cheering us on.”

The tractors ranged from a seventy year old grey Massey Ferguson to a brand new McCormick from a local dealership and almost everything in between including a quad bike and a beautifully restored vintage GMC American pick-up.

A particular highlight for many of the spectators were the Kylerin and Keystone Clydesdales, both immaculately turned out in harness on the carts and a symbol of Kinross Show and a reminder of a bygone era.

The procession started at Fruix Farm and headed for Kinross High Street then onto Milnathort, Balgedie, Kinnesswood and Scotlandwell. The route then followed the B9097 passing the Kinross showground at RSPB Loch Leven.

The theme for the float was farming in Kinross-shire and Daisy the milking cow took centre stage. On loan from the Royal Highland Education Trust, Perth and Kinross, she represented the five dairy farms left in the area. Together they produce many millions of litres of wholesome milk each year, much of which is supplied to the local supermarkets. A beautiful Angus calf and two lambs stood beside Daisy, a symbol of the beef and sheep that graze on the lush grass in Kinross-shire throughout the year. In amongst the colourful bunting and balloons were sheaves of oats, wheat and barley, and the final touch was an arched rainbow which paid tribute to all of the local key workers.

“In this time when we aren’t allowed to reach out and communicate in normal ways, I think this parade sent a strong message that faming in Kinross-shire is a vibrant and modern industry. We are all proud to showcase our produce with those who enjoy it. The support at the parade and all the positive feedback online means a great deal to the show committee, it’s great to know that farming and the Kinross-shire Agricultural Society is important to our community.

Many thanks go to the small group who decorated the float, and we hope everyone read the message along the side – Kinross Show will return on 14th August 2021, we hope to see you there.